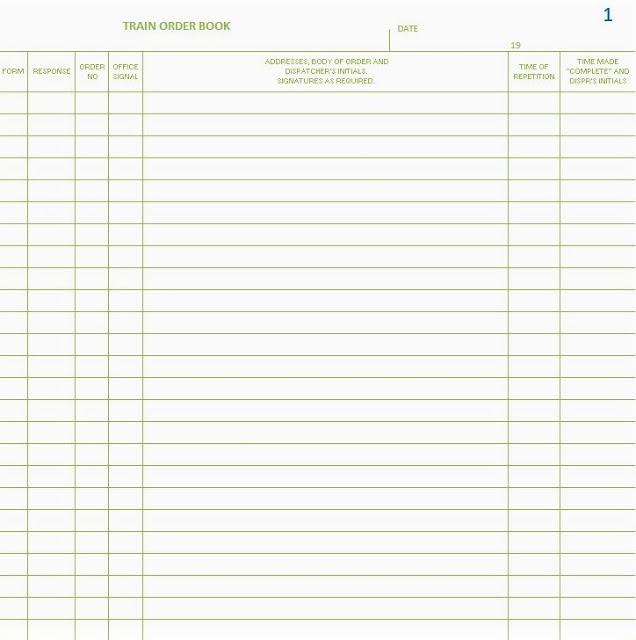 (The page is a little longer)


The train order books that we used in Edmonton, when I was dispatching for CN, were hard cover and contained 200 pages.  They were used for Train Order territory, CTC territory and also for MBS bulletins (slow orders).  Each desk had its own number series for the territory (group of subdivisions) that it controlled.  The book used for active train orders and clearances used a number series in the hundreds, i.e. 100-199, 200-299, etc. and began at the first number (100 or 200 or 300..) at 0001 (midnight) every day.  If the desk controlled busy train order territory, the number series may have used 200 numbers, eg. 100-299, to prevent duplication of numbers on the same date.  There was a separate book numbered in the thousands, i.e. 1000-1999, etc., for slow orders, which were re-issued, if they were in effect for longer than two weeks.

At the time that I was dispatching, we only used Form 19 train orders and therefore we had to use the letter Y or R following 19 in the first column.  Form 31 orders were not used.  The dispatcher would dictate the order to one or more operators at the same time and he/she would determine whether the order should be a 19Y or 19R. 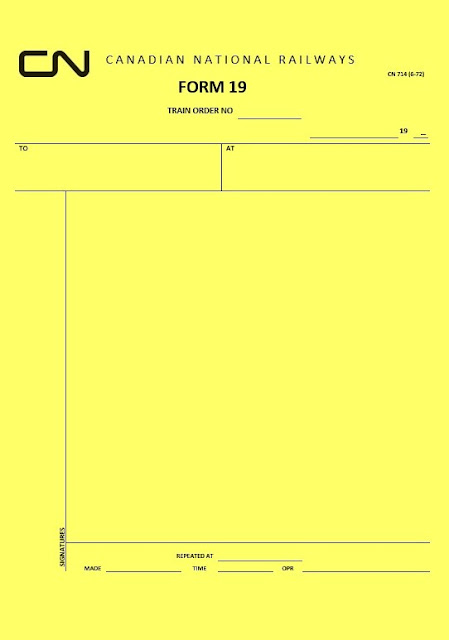 The operator at each station would make as many copies as required in duplicate.  Fortunately for me, by the time I began as an operator, the 19's came with carbons already inserted in bunches of three.  The dispatcher would include the instruction on how many to make by saying "Blue River, 19Y West, copy three" or "Avola, 19R East and West, copy five".  The operator would then set the train order signal, get the correct number of sheets in the typewriter and respond with the indication showing on the train order signal.  If the train order signal was already displaying red or stop, and the order was a 19Y, the correct response would be SDR"direction".

When everyone had responded, the dispatcher would begin dictating the train order, giving the type of order (19Y or 19R), the the order number (only once), beginning with the first train order station, writing the office signal in the next column, then the address in the larger column.  This continued with each station involved until all had been addressed.  At that point, the dispatcher would say "Period".  Then everyone knew to begin typing the body of the train order.  Once the dispatcher had finished the order, he would give his initials, such as "NTS" (my initials).  At that point, the dispatcher would expect each office to repeat the order, beginning with the first addressed.  Once the operator finished repeating the order, the dispatcher would give him/her a repeated time.  For most orders, this time would also be the completed time.  The operator would write the time in the "Repeated" space, the three letters "Com" after the word "Made", the time next and then sign the order using their last name.  If an order had to be repeated for any reason after the original repeat, the two times would not be the same (eg. signatures required, needed more copies, etc.).  Each operator would do the same in succession. 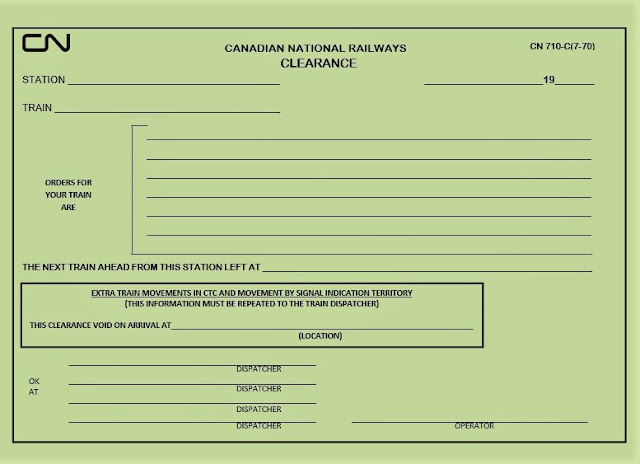 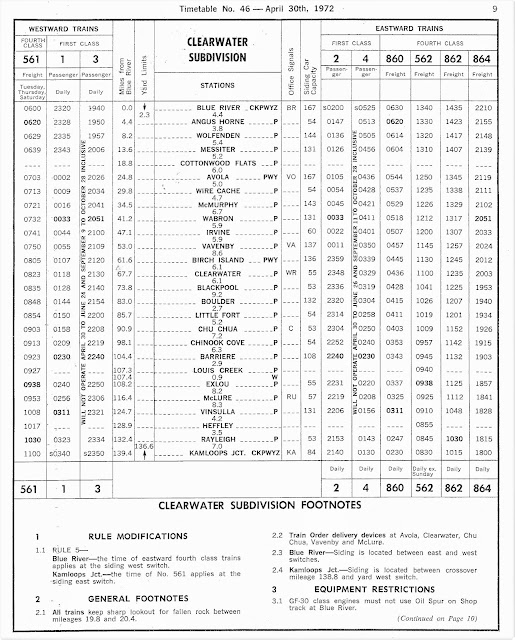 Each Subdivision had a separate time table.  As you can see from this example of the Clearwater Subdivision, it had schedules in both directions for the First Class trains and the way freights (561/562).  There were three Eastward Fourth Class schedules spaced about 6-8 hours apart.  Because a schedule remains in effect for 12 hours after the time at each station, unless fulfilled, superseded or annulled, most eastbound trains could use the schedules and make it over the road without running out of time.  The schedules were run in sections, sometimes as many as 7 or 8. All of the westbound trains were run as extra trains and could proceed by dodging the eastward schedule trains, but would likely be helped along by the dispatcher using train orders.  At the time of this time table, there were five open train order offices on line and numerous long sidings (10-15 miles apart), so the dispatcher had some flexibility.  There were many good dispatchers and many ways to dispatch.

Because we operate model railroads, dispatching with time table and train orders can be quite difficult.  The times (fast clock) are also very compressed and people are not trained.  It can work, but time is quite often the determining factor.  I have found, that for my model railroad, a signal system is a much more satisfying approach to moving the trains.
Posted by Norman S at December 03, 2017